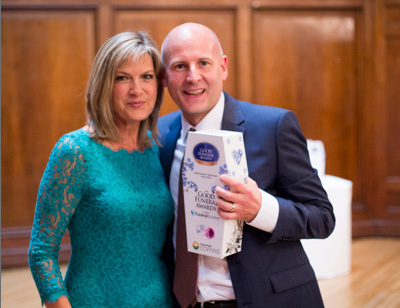 On Thursday 8th September 2016 the UK’s ‘Funeral Oscars” took place. The Good Funeral Awards were created by The Good Funeral Guide.  The Guide is a not-for-profit social enterprise company, who are wholly independent of the funeral industry. They are dedicated to supporting, empowering and representing the interests of dying and bereaved people living in the UK.

Since 2012 The Good Funeral Guide have been recognising the great work of the country’s best funeral related workers; gravediggers, embalmers and funeral directors, through an Awards Ceremony.

MuchLoved were absolutely thrilled to be awarded the prestigious title of “Best Internet Bereavement Resource 2016” presented to our founder Jonathan Davies by journalist and broadcaster, Penny Smith.

Our Anubis statue award, which came in a small coffin-shaped box, will take pride of place in our office.